So it’s been nearly a month since we (Emmma the impresaria, manager, sound tech, driver and so much more plus yours truly) came back from this round through Switzerland and Germany and due to computer chaos… well ok my proverbial laziness i’m just reporting it now.
It was actually the first bit of a tour in Flip’s „career“ (if we omit this 2 day tour through Lichtenberg AND Friedrichshain back in ’16) and my first experience abroad with this project, so i guess it makes me an international artist, doesn’t it? What can i say, it’s been jes’great! Thanks again to all the people (i’m dramatically bad at remembering names and faces, sorry if i missed some, i swear i try my best!) who helped us, to those we met or simply attended the shows!

It started in Zürich, where we were visiting with the great people (Adi, Guga et altri) at Koch Areal who organised an improvised monday show at the Xenix bar downtown. Most of the audience was from Koch, ähm peeps who knew of the concert, and the ambience has been quite great and forgiving on my out-of-tuneness (a personal skill of mine). Cool persons working there, too. 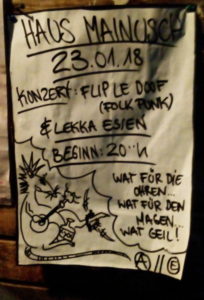 The next show (after THREE border crossings, darn navi) was in Mainz, at Haus Mainusch, a self-organised center with a twin wagenplatz in the middle of the university campus. It’s been there and active for 30 years now, but unfortunately the authorities want to kick them out on the 30. june of this year… The outcome is unclear, let’s hope a positive issue will be found. Like: HAUS MAINUSCH BLEIBT!
About the concert: the super cheerful and attentive audience showed a lot of comprehension regarding my attempts at low intensity humor and helped me give my best. A guy i talked with after the show wanted to buy a banjo and start playing! Oh the magic of… beer drinking? (i sure hope he did) Thanks go especially to Paula, Mark (great handmade posters) and Elena. 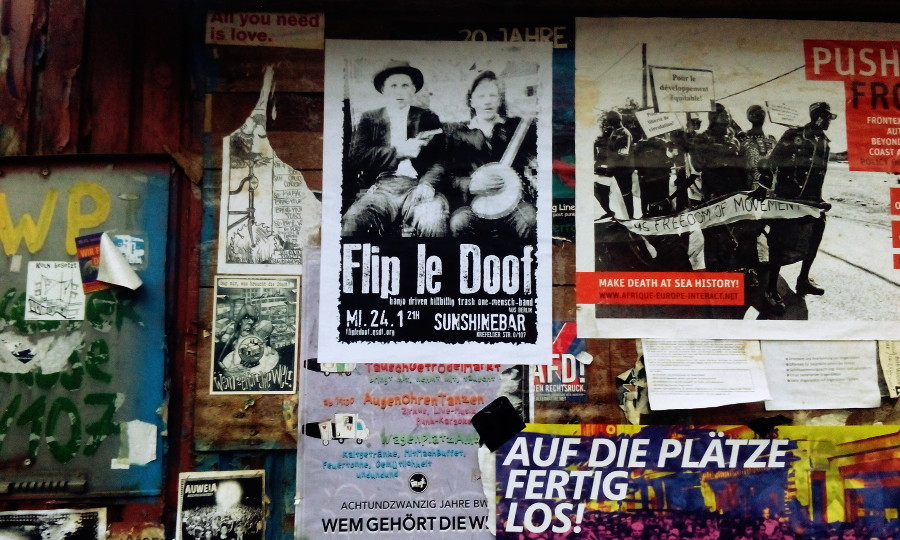 The next day, after savoring a great küffa at Haus M. (hey they propose that every day!) we headed to the (bau)wagenplatz „Wem gehört die Welt“ in Köln for a show in their skillfully built and heated Sunshine bar.  The concert went quite well, though not as much as did the afterparty, eventually involving vodka, puke and more at some point. I guess i left at the right moment!
The next afternoon was a good time to pay a little visit to the city hall, not for touristic reasons at all, rather to attend a meeting where the future of the wagenplatz was debated. In short the city wants to sell the plot, again the outcome is unclear. And again: WEM GEHÖRT DIE WELT BLEIBT!
It has been great to meet and exchange with these nice people from the place, among them Till, Schmi, Brandon (one more banjo picker eheh), Sara… 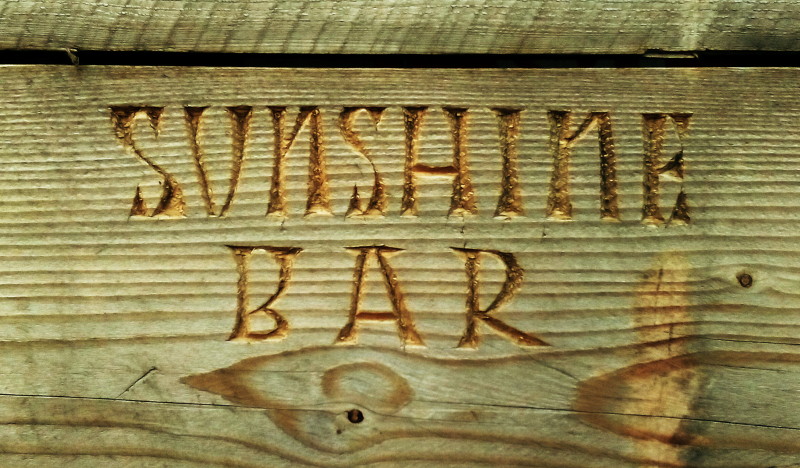 The same evening we had an impromptu show at Osterinsel, another wagenplatz in Köln, thanks to Vroni and Ina. The place is super tiny and nice, which helped have a warm and chaotic concert, special kudos to the „hee-ha“ choir in the audience.  Another place i sure would like to visit again!

After a day off at Osterinsel, we drove at full speed through Germoney to Quarzlampenkombinat in Leipzig (oh well Markkleeberg) for the last show of this minitour, at Elias’ party.  Once again, great people – yes you: Elias, René, Christian – great party, and a special mention to the star of the night, the pneumatic caiprinha machine! An advice, though, if i may: never, ever, ever put your fingers into that piston thingie. Never. 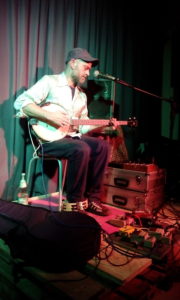 A hangover later we drove back home, and it felt understandably sad that it was over. Plus it was sunday. Sad. And the weather was shit. And we had an hangover. Oh well.
Anyway we’d sure have enjoyed a week more or three of the same – and i’m looking forward to have it happen soon!
And at the risk of being repetitive, thanks to all without whom etc…
And even more thanks to Emmma of course.

And dazu a couple songs recorded at Haus Mainusch in wild wild mono-fi.